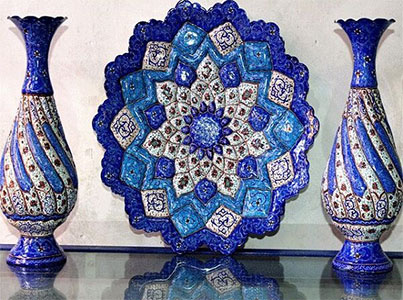 Secretary of Isfahan Sustainable Tourism Development Working Group: The Handicrafts Reconstruction Headquarters will be established in half of the world Isfahan - Secretary of Isfahan Sustainable Tourism Development Working Group said: "In order to overcome the current crisis of handicrafts in Isfahan province, the" Handicrafts Reconstruction Headquarters "should be formed in half of the world as the center of this industry.  In an interview with Mehr, Sattar Kianpour emphasized the rich capacities of handicrafts, especially in Isfahan, and said in an interview with Mehr: "A large family, including homeless women, relief committee and welfare are working in this industry." He pointed to the direct connection between handicrafts and artists: "The events of last year, and especially the outbreak of corona, have caused many problems in both the production and marketing and sales of these products." The Secretary of the Working Group for Sustainable Tourism Development of Isfahan Province considered the impact of the Corona outbreak as a global epidemic and added: "Government support packages are needed to overcome the current situation, and this support must be provided intelligently and effectively." Providing intelligent support packages by the government Reiterating the government's support for the industry in the current situation, he said: "Due to the variety of damages in handicrafts, it is necessary for the government to provide the necessary support by providing smart packages that are appropriate for each field of handicrafts." Kianpour pointed to the burning of opportunities during the Nowruz holidays in the sale of handicraft products with the spread of corona and specified: it is necessary for professional expert teams to assess the level of damage to this industry and consider different packages for different classes according to the amount of damage. Defining handicrafts and needs assessment in target markets He described the role of handicrafts activists as special and important: "Corona and future diseases and crises are a warning sign to redefine the production, promotion and sale of handicrafts and to select the target market by studying and assessing needs."   The Secretary of the Working Group for Sustainable Tourism Development of Isfahan Province, proposing the establishment of a "Handicrafts Reconstruction Headquarters", said: Overcoming the current and future crisis is a solution. Emphasis on the keyword "handicrafts for life" He stressed the need for people to support each other in the current situation, adding that in order to achieve the slogan of the year, citizens need to consider handicrafts as part of their normal lives and not as luxury goods, and "handicrafts for life" can be purchased. Make the industry thrive.