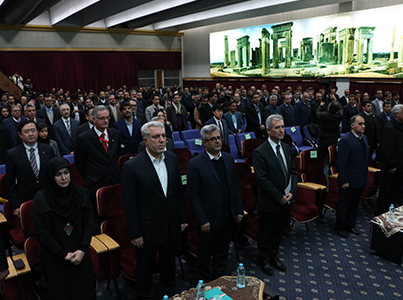 Opening Ceremony Lecture by Dr. Monesan, Minister of TourismThe Minister of Culture, Tourism and Handicrafts said that tourism has other functions besides economic function: " Tourism transfers cultures and generosity between nations. " Dr Ali Asghar Monesan added: "I am very happy that another event is taking place in the field of tourism in the country and I thank all the organizers of this exhibition." "I believe that tourism has some other aspects like as cultural and social aspects which are more important than economic aspect and encompasses important cultural and social dimensions, and one of the most important functions of tourism is to introduce cultures and transmit them, which contributes to the goodwill and communication between countries," he said. Culture is an important part that is ignored and not well transposed and will be destroyed; by introducing cultures, tourism promotes cultural prosperity and promotes human achievements that are tangible and intangible heritage. So, in my opinion, tourism has a human and cultural look before it has an economic outlook. "Where tourism flourishes, the interactions of the governments of those countries are also well connected, because tourism goes beyond economic dimensions and encompasses important aspects such as cultural and social dimensions,". Almost all cities in the country can be defined as good tourism destinations," Monesan said, "Fortunately, our country has a lot of capacity, mountains, seas, forests, deserts and so on." What is going on shows that the future of tourism is a bright future. ” He further mentioned the events of the last two months in the country, adding: "Sometimes we also see events that can have an impact on tourism, but given the high experience of the Iranian people and their efforts to tackle important issues such as war with perseverance and diligence, we can pass these events. "Certainly things like the Ukrainian plane crash are bitter for all of us, but with all the efforts you will have, I am confident that the growing tourism trend will continue as we have inherently great attractions for foreign tourists with diverse climates," the official said. The kindness and hospitality of Iranian and the unique tourist attractions play an important role in the development of this industry. ” Monesan went on to highlight efforts to boost the tourism industry, adding: "We have prepared the country's tourism development document and will soon be approved by the government. "The document and its implementation will see a more planned move in the tourism industry." The Minister of Culture, Tourism and Crafts, in another part of his remarks, pointing out that the good thing this year is the presence of handicraft artists next to the Tehran Tourism Fair, which is one of our proudest sectors, adding:. " Therefore, holding a tourism and handicrafts exhibition at the same time will produce good results." Monesan said at the end of his speech: "I have no doubt that if there is any another economy in the country to reduce our dependence on oil, given the capacity in the country, it is certainly tourism."