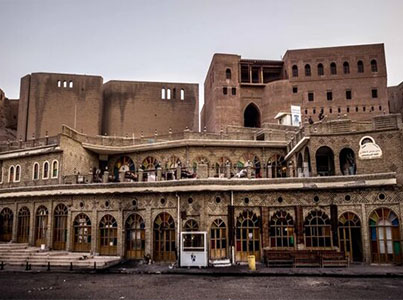 In an interview with Mehr, Nader Rosti said; Kurdistan Region seeks to develop tourism relations / high number of Iranians entering   A spokesman for the Iraqi Kurdistan Region Tourism Board said: "Statistically, Iranians make up the largest population of foreign tourists in the Iraqi Kurdistan region."   Nader Rosti told Mehr about the annual statistics of Iranian tourists in the Kurdistan Region and vice versa: "Due to the special climatic conditions and the security of this region, 80% of the population of Kurdistan Region tourists are domestic tourists, especially from the southern and central provinces of Iraq." And only 3% of tourists here are foreigners, most of them from Iran.   Stating that Iranians are the largest population of foreign tourists in the Iraqi Kurdistan region, he added: "The proximity of Kurdistan to Iran in terms of geography, borders, culture, language, religion and society has increased the level of economic exchange and tourism between the Kurdistan region." Iraq and Iran.   Nader Rosti said: "Meanwhile, most of the Iranian tourists visit the cities of Kurdistan, especially Erbil and Sulaimaniyah, for various reasons, such as visiting relatives and acquaintances, having fun, visiting ancient places and trade."   A spokesman for the Iraqi Kurdistan Region Tourism Board said in response to a question about the purpose and destination of Kurdistan Region tourists visiting Iran: "Most tourists visit the northern provinces of Iran in spring and summer to have fun and enjoy pristine nature. Also, for medical purposes, thousands of citizens of the Kurdistan Region visit medical centers in major Iranian cities, including Tehran, Kurdistan Province, and West Azerbaijan.   Rosti announced that the number of tourists entering the country from more than 3 million people from outside the region increased in the first half of this year, adding: "In the second half of this year, we saw an increase in the population of 4,000 tourists from abroad and other parts of Iraq." This year, however, we have seen the closure of the tourism sector due to the outbreak of the coronavirus and the closure of international thoroughfares, borders and even the closure of communication routes between cities in Iraq and the Kurdistan Region. What happened in most countries of the world and the end of this situation is still unknown.   He said that the Ministry of Finance of the Kurdistan Regional Government is responsible for reviewing tourism revenue, adding: "Tourism institution in the region is a subdivision of this ministry and operates with a specific budget, but does not know how to generate revenue for tourism in Kurdistan and Iraq!"   Referring to the diversity of tourism centers in the region and its division into ancient, natural, recreational and local places, the spokesman of the Iraqi Kurdistan Region Tourism Board said: "We have officially registered about 3 regions and tourist destinations for the whole region."   The spokesman of the Iraqi Kurdistan Region Tourism Board reminded the existence of local cultural and food development centers in this region of Iraq in order to attract tourists, said: "Certainly, the Iraqi Kurdistan Region is ready to benefit from the experiences of neighboring countries in order to develop Iran's tourism sector." For this purpose, we have held joint exhibitions in this regard several times in the form of official delegations, while meeting and negotiating with the relevant Iranian officials. However, we continue to emphasize our relationship and efforts to benefit from Iran's tourism experience.   Nader Rosti said about the ancient and recreational places that tourists visit in the Kurdistan Region: "Every year, a group of culture and history enthusiasts travel to this area to see its attractions, including ancient sites such as Shandar Cave." 3,000 to 6,000 BC and the discovery of the Neanderthal skeleton, the historic citadel of Erbil in the center of the city with more than three houses dating back to the fifth millennium BC, a city in the Badinan region built on the castle Ghobahan School is located next to it, which is 3 years old and was once one of the largest scientific and religious centers and academies in the Islamic world. Hennessy in the northeast of Sheikhan city, which was built by King Sennarib about 3 years ago in a valley-like atmosphere and dynasty. It is built on high mountains and contains sculptures, carvings and temple caves, such as the Dalal Bridge in Zakho, which archaeologists date back to the Hellenistic-Greek period and others to the Islamic Caliphate. Qaqqapan on the border of Sulaimaniyah province, which dates back to the reign Darius the Medes returns and consists of three corridors that hold three tombs and the Sulaimaniyah House, which is now the center of the city.   Referring to the pristine and pure nature of the Kurdistan Region, despite its waterfalls, caves, rivers, etc., Rosti said: The existence of natural caves such as Kunehbayi Cave, Bastun Cave and 2 and more than 2 beautiful waterfalls such as Ali Beg, Akari, Ahmadabad, Kani waterfalls. Bast, Bikhal, Sharans and Ash-Abad have made the Iraqi Kurdistan region a destination for relaxation and entertainment.   He further pointed to the measures taken in the field of tourism in the cities of the Iraqi Kurdistan region and added: Modern amusement park, cable car complex on the mountains of Dehuk province, Land printed complex in Sulaimaniyah city, which connects this city to Azmar mountain, along with special facilities and services in the foothills and above the mountains, provide special conditions for attracting tourists in this area. has brought.   Rosti refers to a collection of minarets, Sami, Shaneh Dar, Aqua Park, Mal Dylan amusement park and the Van family park in Erbil and Par